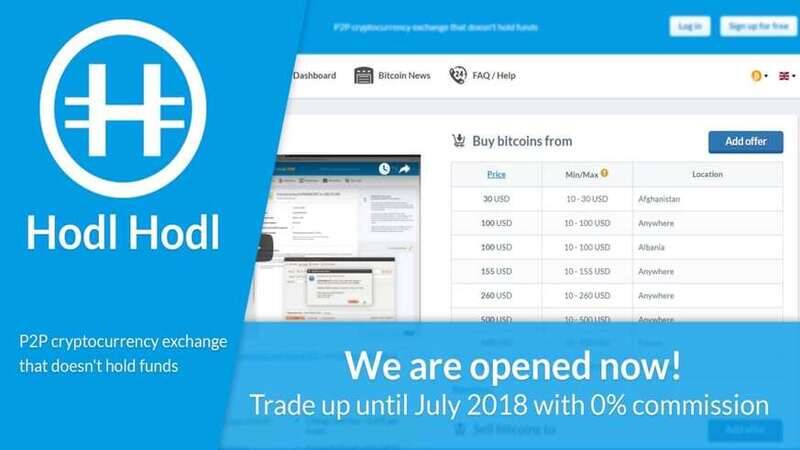 This week as people hear about the peer-to-peer exchange Localbitcoins requiring identification for traders who deal in “significant” trade volumes, many of them are scouring the internet in search of decentralized exchanges that don’t require Know-Your-Customer (KYC) verification. One such trading platform called ‘Hodl Hodl’ launched its beta version this past February allowing traders to swap cryptocurrencies without the need for regulatory compliance protocols. The Peer-to-Peer Multi-Sig Escrow Exchange ‘Hodl Hodl’ Doesn’t Require KYC Verification There’s a new peer-to-peer cryptocurrency exchange called ‘HODL-HODL’ a platform that launched this past February, allowing traders to trade digital assets without the need for a third party. The trading platform creates a multi-signature escrow system that sets a predetermined trading time for both participants. At the moment Hodl Hodl is in its beta form and only has two cryptocurrencies available for trade at the moment which include BTC, and LTC.

The creators of the exchange state more features will be launched when the platform comes out of beta in the summer of 2018. Hodl Hodl is very similar to localbitcoins and the platform Bitquick as it allows deals between buyers and sellers. The trading platform does not require users to verify their identities. Moreover, there are many options available for payments such as Moneygram, Skrill, various credit cards, Venmo, Western Union, Alipay, and many more. In order to sell BTC or LTC, a user simply fills out the trade requirements which include location, the amount they want to sell, a payment window, and the payment type. On the buyer side, users choose which cryptocurrency trades and the specific requirements look enticing to them. For instance, certain payment options for purchasing BTC on Hodl Hodl are higher than other options available. Credit card purchases show a price of over $9,000 per BTC while other options are still a few hundred dollars more than the current spot price. Peer-to-Peer Review and Reputation System to Curb Counterparty Risk Because the platform is still in beta users can experiment with the Hodl Hodl testnet exchange first. When the peer-to-peer platform comes out of beta, the exchange will be charging a maximum of 0.6 percent per trade.

However, right now up until the beginning of July 2018 the exchange is waiving fees for users. Hodl Hodl claims they do not hold funds and basically provide traders with “secure multi-signature (P2SH) contracts, and you control the key to the funds in escrow.” Additionally, the platform offers two-factor authentication (2FA), and a dispute resolution system as well. Hodl Hodl does not require KYC verifications but does have a trader review and reputation system.

The exchange explains the rating system is used so counterparties can be trusted among other traders. “It shows whether he is fulfilling his obligations to other parties, whether he makes the payment fast, and whether he is responsive,” explains Hodl Hodl. “The Rating system is a useful tool for traders — it is information about how the trader behaved in the past and a reason/incentive to continue to act properly in the future.” Hodl Hodl Doesn’t Leave Beta Until the Summer of 2018 Overall the Hodl Hodl system’s cryptocurrency trades function similarly to peer-to-peer ‘escrow-like’ trading platforms. Much like Bisq,Barterdex, and the other exchanges that facilitate trading activities without KYC in a decentralized manner — the Hodl Hodl platform doesn’t have a ton of action as far as volume. At the moment there are users selling BTC in various increments up to $10,000 USD, but some have caps between $300-1,500. The development team has explained that more cryptocurrencies will be added in the future alongside improving its mobile interface.