Home Ethereum & Other Altcoins Are All A "Pyramid Scheme" - Max Keiser. 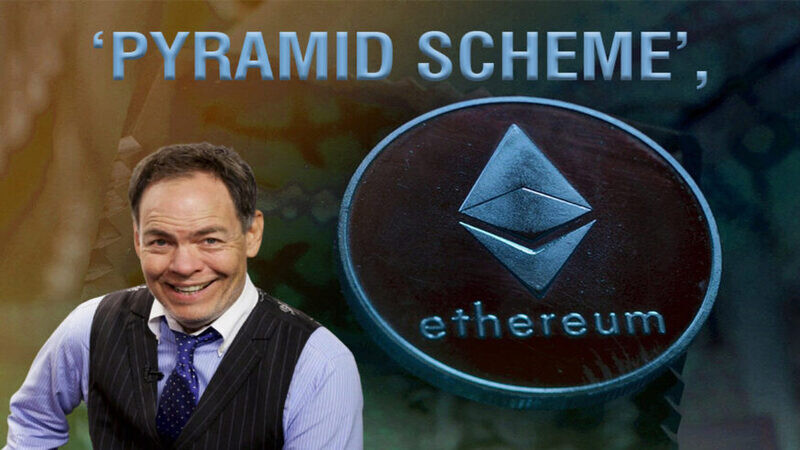 Max Keiser, a prominent crypto analyst, and erstwhile Wall Street trader have disclosed that he considers cryptocurrencies, particularly Ethereum ($ETH), are "simply blatant hoaxes" that will soon cease to be.

Keiser, a well-known bitcoin bull, told Kitco News' Michelle Makori that these cryptocurrencies are a "pyramid scam." Throughout his discussion with Makori, he stated that any cryptocurrency other than BTC is unsustainable and lacks the attributes of sound money that BTC possesses.

He claims that Bitcoin features scarcity, decentralization, anti-fragility, and resilience to being "pumped and dumped" via a pre-mine.

Individuals are "waking up to the truth" that these altcoins are "simply blatant frauds," and there "have not been any helpful progress on any of these cryptocurrencies at all that hasn't been revealed to be a complete fraud," according to Keiser.

According to the former Wall Street trader, decentralized finance initiatives "regularly blow up" because protocols in the DeFi field "live in a murky region that is beyond of any rules." Bitcoin, according to Keiser, is the finest sound money option for humanity.

Keiser went on to say that he compares Bitcoin's present level of popularity to that of the internet in its early days and that he expects BTC's use will ultimately be "widespread." According to him, "software rules the globe," and software would soon alter the money sector, which is currently "mired in 100-year-old, 200-year-old technology."

Keiser claimed to own gold but has since switched to Bitcoin. The veteran Wall Street trader has stated multiple times that he expects bitcoin will reach $220,000 eventually this year, as the network's hash rate has reached a fresh high.