Over 20 tokens, including cryptocurrencies like BNB, Safemoon, BSC-USD, and BPay, were stolen by the hackers from Bitmart - Let's Know How? Bitmart, a cryptocurrency exchange, suffered a $200 million loss due to a hot wallet compromise on the Ethereum and Binance Smart Chain blockchains. The $200 million Bitmart breaches were first discovered by Peckshield, a blockchain security and data analytics firm that discovered a $100 million transfer across the Ethereum blockchain. Over 20 tokens were stolen, including cryptocurrencies like Binance Coin (BNB), Safemoon, BSC-USD, and BNBBPay (BPay). The attack also revealed large amounts of meme currencies such as BabyDoge, Floki, and Moonshot. According to Peckshield, the hack was a straightforward case of transfer-out, exchange, and wash. 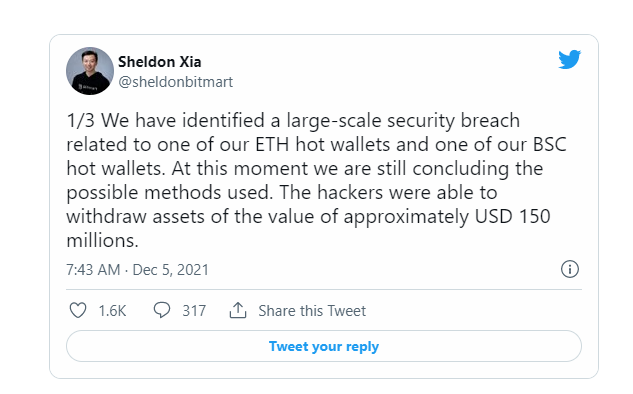 In what appears to be a continuing danger to the crypto ecosystem, cryptocurrency loan provider Celsius revealed a $50 million loss due to an abuse of the decentralized finance (DeFi) protocol BadgerDAO. The protocol officially declared on Wednesday that it had received many exporters of unauthorized withdrawals of user currency, prompting the first reporting on BadgerDAO's security vulnerability on Thursday. To avoid more losses, the Badger team investigated the problem and suspended all smart contracts on the protocol, as Bitmart had done.