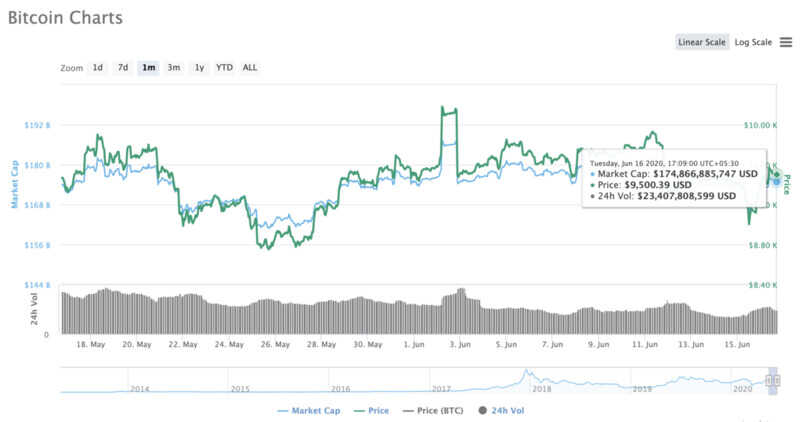 There is a strong vibe ongoing in-between the crypto experts that the price of the leading cryptocurrency 'Bitcoin' is about to touch a five figure price soon.

In line with recent data by CoinMarketCap, its quite clear that Bitcoin has already gain above $500 USD for the day, hitting as high as $9580 USD, which for now has emerged as a strong price support. Further price rise are expectedly strong for $10000 USD benchmark.

As reported earlier, stock exchange action continues to shape the price of Bitcoin performance. A pre-trading route followed earlier on Monday sparked a quick trip below $9k USD while Bitcoins recovery came in tandem with a surge higher across stocks.

These fluctuations for the dip and rise came within the sort of COVID concerns followed by a stimulus announcement from the U.S. Federal Reserve.

After the Fed announced that it might intensify its presence in bond markets, rumours surfaced that Donald Trump’s administration was preparing an infrastructure investment boost worth above $1 Trillion.

The results of Monday’s action appears to be that Bitcoin [BTC] remains exposed to macro forces, rather than the broad “decoupling” phenomenon that the leading cryptocurrency has undergone since the starting of the COVID crash since March.

Despite the ongoing volatility, the price of the leading cryptocurrency Bitcoin is expected to return somewhat around the $9,500 zone for some time.

Moreover, while speaking to Forbes on Monday, Van de Poppe argued that Bitcoin “needs to reclaim $9,300 relatively fast” so as to stop a loss for the moment.

$8,600 USD represented a “crucial pivot,” he added, with a failure to carry that level a call for participation to check the 200-day moving avg - presently at just over $8k USD - or as low as within the $6,000 USD price-range.

Others are similarly cautious. Among them there are some experts, who last week even warned that $10k would likely still evade the market. Instead, the main target should get on levels closer to $8,000.